Natural Land Institute was pleased to present the George and Barbara Fell Award to Fran Harty at the Party on the Prairie Rocks fundraiser held at Nygren Wetland Preserve (Rockton, Ill.) on July 16, 2022. The award recognized outstanding leadership and accomplishments in land preservation, protection and conservation in the state of Illinois.

It is almost impossible to think of the preservation of a wondrous, rare natural area in this part of Illinois and beyond, that hasn’t worn the shadow of Fran Harty’s trademark Stetson Hat (he owns three!). From the Momence wetlands and the black oak savannas of Pembroke Township to the incredibly rare last vestiges of the Everglades of the North – the Grand Marsh of the Kankakee River, from Gooseberry Island in the Iroquois River at Aroma Park to the Goose Lake prairie inin Grundy County, Fran was there!  He was involved with the diversion of the Savanna Army Depot into conservation lands and in the development of the Midewin National Tallgrass Prairie and the Lost Mound Unit of the  Upper Mississippi National Wildlife and Fish Refuge. Fran is known for big-picture projects. He helped bring bison to Nachusa Grasslands and Midewin National Tallgrass Prairie, established the Kankakee Sands preserve, and worked on adding to the Cache River Wetlands preserve. Fran’s career as one of the state’s foremost conservationists spans several decades. He began as a field ecologist for the Illinois Natural Areas Inventory, worked for the IDNR Division of Natural Heritage and recently retired as Director of Special Projects for The Nature Conservancy of Illinois.

One of Fran’s most significant accomplishments was crafting and garnering support for the passage of the Illinois Natural Areas Stewardship Act that now provides grants for stewardship for Illinois land trust organizations, filling a much-needed gap in funding. It is an honor to award Fran Harty the George and Barbara Fell Award for his lifelong dedication to and his many accomplishments in protecting and conserving natural areas in Illinois. 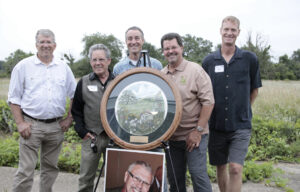